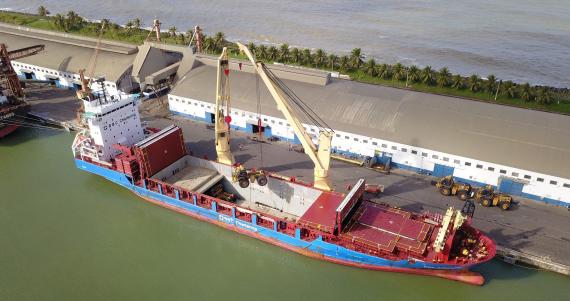 CMX Global Logistics are pleased to share the impressive photos in the gallery below featuring a charter they completed last month from Ilheus in Brazil to Brisbane, Australia. The cargo consisted of 11 x CAT785D dump trucks plus accessories, totalling over 3,500ft.

The scope of work handled by CMX included sending representatives to the origin in Brazil to instruct and supervise the washing of the cargo for Australian quarantine standards, the chartering of BBC Xingang for the sea freight, and the destination works of import clearance, discharge operations, quarantine clearance, transport from hook to wash pad and overseeing the discharge washing and release.

Kira Seeley at CMX comments; "The origin washing is always a challenge when importing used machinery to Australia and on regular trade lanes, we have established relationships with wash pads. But in unusual or more rural originating points, the facilities generally aren't there which means we send someone over to instruct and help with the washing process as well as ensure they have all the equipment and labour to carry out the job. We were at the start of the origin scope of washing when the COVID-19 pandemic was gaining momentum and once Australia ordered all its citizens home, our skilled washing personnel were forced to return and the origin agent had to take further instruction remotely over WhatsApp, phone calls and emails.

When the charter arrived into Australia, the local border force placed a hold on all the cargo as such an unusually large shipment from an uncommon originating point during a worldwide pandemic had raised some red flags for them. However, CMX worked closely with both the local border force authorities and the port authorities to have the cargo processed and released as quickly as possible with the transport to transfer all the trucks from the port to wash finally happening at midnight on a Friday night."

Despite the challenges faced, CMX Global Logistics showed their efficiency and expertise once again with another successful project.