Shipway (members in Argentina) recently handled the shipping of 2 spray dryer chambers plus accessories. Their scope of work involved many areas of services including packing, stuffing, trucking and ocean freight.

The OOG cargo was loaded on a 40'FR with the accessories on a 40'DV and 40'DC. It was collected from Avellaneda in Argentina and delivered to La Molina in the Lima Province of Peru.

Cap. Juan Carlos Krahl, Operations Director at Shipway, explains; "After visiting the client's premises to obtain field information, two working schedules were offered, based on two different oversized cargo packing options. Once the schedule was chosen, the containers were provided in staggered way, considering space and personnel limitations during the current pandemic."

"Shipway organised and carried out the packing, including VCI anti-corrosion film, silica gel and heat sealing, for the chambers protection, as well as seaworthy tarps, lashing and securing materials for the seafreight transport. The stuffing works were carefully planned to optimise time and space availability. Given the cargo dimensions and plant height limitations, the chambers were loaded in the street, which demanded crane positioning outdoors, obtaining necessary permits with local authorities, insurance cover and security escorts. The chambers were lashed and secured with 5tn straps and timber blocks with the accessories stuffed in 40' DV and HC containers inside."

"Once inspected by in-plant customs officers, the cargo was moved to port using a 4-axle lowbed trailer for the 40'FR FCL and 2 standard drayage trucks for the standard FCL containers. Upon arrival, they were loaded to the vessel to set sail for Peru.

The cargo arrived in Callao on time as per the planned schedule with everything ready to comply with customs formalities and continue to the final destination with no delay. The oversized cargo was moved from the port at dawn on a ten-hour trip with a transit through Lima city. All cargo was received at the final destination in good order and perfect condition."

A swiftly and professionally handled project from Shipway Argentina! 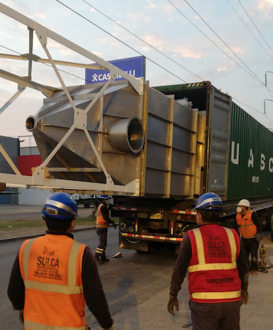 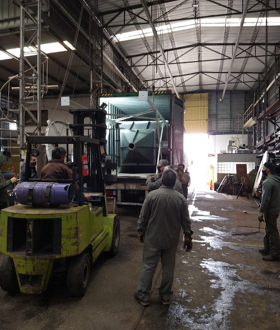 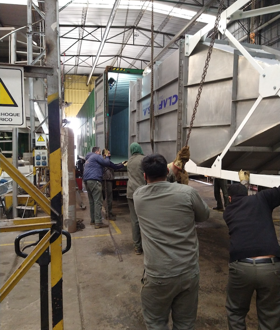