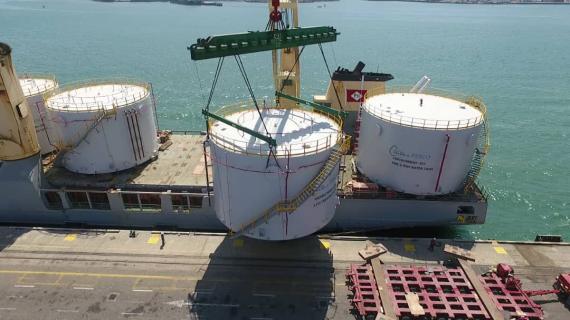 W.I.S. have recently arranged a OOG shipment as part of a power plant project in Aden, Yemen.

W.I.S. have been entrusted with the execution of the 264mw Aden Power Plant (Phase 1) near Aden in the Republic of Yemen. This first phase out of four consists of approximately 50,000frt of cargo including heavy lifts of up to 220mtn.

The latest shipment in the project consisted of 10 fully assembled storage tanks (as photographed in the gallery below), each with diameters of between 15.0-16.5m, heights in excess of 10m and weights between 60-70tn. Including the ancillaries and additional other cargo, the total volume amounted to almost 25,000frt, one of the largest ever undertaken by W.I.S.

It took W.I.S. 2 months of planning and the shipment was loaded on MV. Maria from SAL geared with 2 x 350tn and 1 x 250tn cranes which was especially chartered to undertake the exclusive voyage from the UAE to the Port of Aden.

Congratulation to W.I.S. on the successful, safe and reliable handling of this major shipment for an important project!